A new approach to my instrument

There are several pleasures in transcribing. The final one is that of physically appropriating a work which is hitherto inaccessible, not being written for my instrument.

The actual writing of the transcript is also quite exhilarating; to get as close as possible to the general impression produced by a jazz band, a gypsy ensemble, an orchestra, or four harpsichords playing together. It requires a form of creativity and ingenuity that forces me to approach my instrument differently; searching for new textures, richness, colours or ways to combine my ten fingers. There is a game element in it, and even an element of illusion.

It began, as nearly everything in life, when I was a child. I used to spend a lot of time at my grandmother’s, who had old vinyls of Russian songs by Ivan Rebroff, which I loved. I would always try to play those songs on the piano. Actually, I think the first time I performed one of those arrangements was at my grandfather’s funeral, when I was eight.

Around 16 or 17, there were some attempts at composing. But I quickly understood that the most enjoyable part of the process was not necessarily the creation of new material, but the detailing, sculpting and the ornamenting of it. This brought me back to transcription. It started with quite a monumental piece: a full version of Tchaikovsky’s Romeo and Juliet.

I noticed that even a composer like Tchaikovsky is very seldom as ambitious (and, in my humble opinion, as genial) in his piano pieces as he is when writing operas or symphonies. I hope to present, through this transcription, some Tchaikovsky as we usually never hear him on piano.

‘Noack’s transcription of Prokofiev’s “Classical Symphony” is not only superbly performed, but a challenge for any virtuoso.’

Obviously, the basic repertoire choice needs to fit. A Brahms symphony as an ornamented and flourished piece for piano would sound quite terrible. As would a literal transcription of the symphony.

The central question I ask myself, is this: how much can be ‘added’ without loosing the essence? To suggest the impact of an orchestra, I often rewrite the piece in a completely different way, since the piano sound cannot be sustained as with strings or winds instruments.

In a piece like Sheherazade, the very element of ‘richness’ and ‘luxury’ in the orchestration is part of its spirit. I try to recreate this by applying, among other things, nearly inaudible ornamentation. One might need a lot of piano notes for something which sounds like a small orchestral vibration!

Nowadays, I prefer to get ideas mainly based on listening. I use the orchestral score at the very last moment, as I think that the look of a score can be misleading. My focus is on ‘how it sounds’ and by what effect I can imagine this sound to be suggested on the piano.

‘Packed with timbres, shades and effects: Noack gathers the orchestral glory in his grand piano and lets every nuance be heard. Virtuosity as a means to an end; an ability that is completely at the service of sensual interpretation.’ 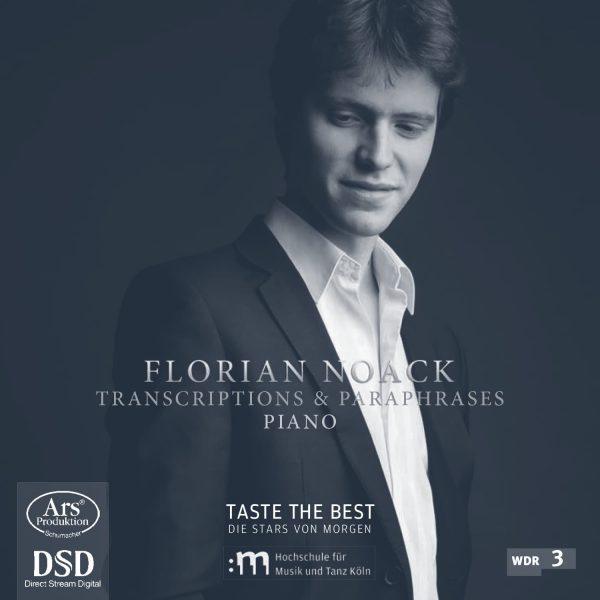 Florian Noack performs his own transcription, at the Köln Philharmonie.

Florian Noack performs his own transcription, at the Köln Philharmonie.

Florian Noack performs his own paraphrase on waltzes from Johann Strauss. Recorded at the Louis Vuitton Foundation.

Florian Noack performs his own arrangement of Shostakovitch’s Waltz No.2, from the Suite for Orchestra No.1